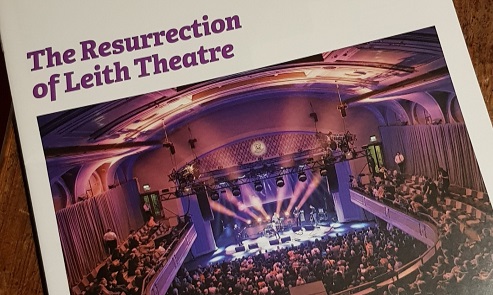 As Scotland’s main port for some 600 years, for centuries Leith has been enriched by a myriad of different cultures, as people from around the world have made here home. From Irish and Italian migration in the 19th century to Leithers from all across the European continent living here today – from our strong Scots-Pakistani, Scots-Indian, Scots-Turkish and Scots-Chinese communities, to Leithers with connections to the Americas, Africa and across Asia; from Ozzy and Kiwi Scots to English, Welsh and Northern Irish Leithers; from the remarkable multi-culturalism we create together, to the inspiring vibrancy of our diversity – an inclusive, welcoming, outward-looking Leith is an ever stronger Leith.

The argument is so strong for migration in Leith that it’s hard to think where to start… There are famous contributions like the work of Eduardo Paolozzi, the Leith-born son of Italian immigrants – a pioneer in the British pop art movement. Few people come to Edinburgh without seeing his famous Manuscript of Monte Cassino – the foot and hand sculptures that stood at the top of Leith Walk for so many years and now on London Road.

There are the life-changing contributions, like the work of local organisations such as the Polish Family Centre or the Multi-Cultural Family Base, who support refugees and many new Scots to settle into life as Leithers.

There are uplifting community initiatives such as Leith Conversation Cafes, who create opportunities for people of all cultures to share their experiences of Edinburgh and their languages, in a welcoming and supportive environment.

And of course there are countless restaurants and cafes that provide so much joy and positivity, as well as creating jobs and growth in the local economy – from Vittoria to Pierogi Najlepsze w Miescie, from Qupi to Casa Amiga, from Café Truva to Desi Pakwan, life in Leith is enriched everyday by our vibrant multi-cultural society.

As a committed internationalist, I’m very proud to represent such a diverse constituency – and to be working with and for our community to make it even stronger. And, of course, this is also absolutely the case in my new role in the Scottish Government, where I’m now working to make our country’s position even stronger as an outward-looking, welcoming, progressive European nation.

As well as being a committed local MSP, at the end of June it was a real honour to be appointed by the First Minister as the new Minister for Europe, Migration and International Development. One of my key responsibilities is to work across government to emphasise the necessity and positive benefits of migration, as well as enhance Scotland’s relationships with other European countries and international partners, and to take forward Scotland’s international development initiatives in our four partner countries Malawi, Zambia, Rwanda and Pakistan.

In terms of migration, Scotland as a whole has so many reasons to feel positive about welcoming new Scots. People come from all over the world to live, work, study and contribute to our communities, bringing valuable skills and enriching our culture. What’s more, with an aging population, in Scotland there is simply a necessity for our country to continue to attract people from elsewhere. In fact, Scotland’s future population growth is entirely dependent on continued inward migration, and talented and motivated people choosing to settle here.

Over the next 25 years, projections from the National Records of Scotland show that the pension age population in Scotland will increase by 25 per cent, with the number of those aged 75 and over set to increase by almost 80 per cent. While there is an overall ageing population in many countries, the key difference in Scotland is that our working age population is projected to grow by only 1 per cent and is even projected to decline if migration is reduced. In order to prevent adverse impacts on Scotland’s economic growth, it is vital that we continue to attract people to live and work in Scotland, with all levels of skills and experience and on both a short-term and a long-term basis.

These statistics are important, especially at this time when Brexit and the UK Tory Government’s irrational “hostile environment” policies are making the UK less attractive. The UK Government’s arbitrary, insensitive, unhelpful, inflexible, unworkable commitment to reduce net migration to the UK to the ‘tens of thousands’ has misguidedly driven UK policy decisions on immigration for the last eight years – and it’s the exact opposite of what Scotland needs. Worryingly, in the last year inward migration to Scotland has dropped by 14 per cent. This is highly concerning for our economy and the continuing enrichment of our society.

Faced with all of this and the challenges of a Brexit Scotland didn’t vote for, the Scottish Government is arguing for differentiated migration policies for Scotland and the devolution of powers to the Scottish Parliament to implement our own solutions. This is something my colleagues and I are vigorously pushing for, not just because of the facts about our population projections but also because of the strength that diversity brings to all of us – strength that is epitomised in Leith.

As Leith’s MSP and Scotland’s Minister for Migration, I am hopeful that while the negativity of Brexit confronts us, and while misinformation about migration is unfortunately out there, in Scotland we can be encouraged and proud that in the vast majority we welcome new Scots and celebrate internationalism. We understand that diversity undoubtedly makes us stronger and that, just as Leith has always welcomed the world, together we must always keep championing the huge benefits of migration – because it’s who we are. We Persevere.

Originally published in Issue 125 of The Leither, which is free and available in cafes, bars and shops around the Leith area.