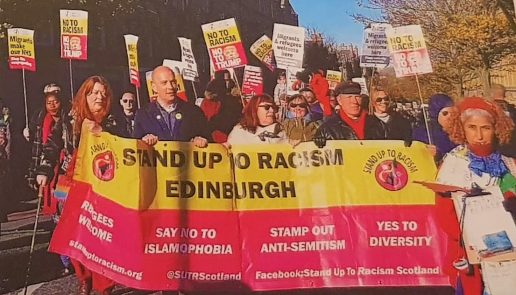 As we approach the festive season and reflect on the past year, a lot has happened in Leith. The renovation of Leith Theatre, for example, brought us another hugely successful Hidden Door festival, as well as ‘Light on the Shore’ as part of the Edinburgh International Festival, and there have been many other shows and concerts since and more are in the pipeline.

Leith was named one of the coolest neighbourhoods in the world by Time Out, in recognition of the hard work of small businesses and community groups in the hospitality and arts sectors, like The Pitt, Leith Depot and others, who all help make Leith such a vibrant place to live.

The Leith community has continued to demonstrate openness and show compassion to those in need. From Citadel Youth Centre’s Integration Project to the work of Multi-Cultural Family Base, from the VOCAL Carers Hub to the Leith Men’s Shed, I have been inspired to hear and see first first-hand how Leithers support each other, to help make sure that no-one in the community is left out or left behind.

And there has been national recognition of Leith on many fronts too, with Hibs’ Ladies Football Team winning both Scottish Cups for the third year running, and the Under 19s team nominated for Scottish Women’s Football Youth Team of the Year. Fearless Femme, Invisible Cities and The Remakery were shortlisted for the Scottish Social Enterprise Awards, and Leith Academy pupils published The Leithers Guide to Leith, with the support of youth creative writing organisation Super Power Agency.

In other ways, this has also been a challenging year. The attack on the Sikh Gurdwara in August felt like an affront to the whole of the Leith community. While eventually it emerged that this attack was not racially motivated, the huge show of solidarity at the vigil a few days later was a definitive and welcome rejection of discrimination, and I was proud to see so many Leithers there in solidarity with our Sikh friends. In the face of worrying developments in other parts of the world, we must all work to strengthen Scotland’s open, inclusive, and compassionate values, and I was proud to join with many others again in October as Leith stood up against racism – emphasising our strength in diversity and collective belief in an inclusive modern Scotland.

Unfortunately, at my advice surgeries and in my office, this year I have also heard how UK Tory government welfare cuts are affecting many in this constituency and elsewhere. In the face of this, and now the disastrous roll-out of Universal Credit, we must keep making the case for the fairer society Scotland wants to be – and the Scottish Government is doing what it can to progress this. For example, from Christmas a Best Start Grant of £600 for a first child, and £300 for new siblings, will be available to eligible parents, to ensure that under 5s get the best possible start in life.

EU citizens and all of us living in Leith have also been let down this year by the UK government’s divisive and damaging handling of Brexit. It has become increasingly clear this year that Brexit will do serious harm to families across Scotland and the rest of the UK. That is why the Scottish Government has been consistent in standing up for Scotland’s democratic wish to stay in the EU, and at the very least to stay in the Single Market and Customs Union.

The SNP Scottish Government has done all it can to mitigate the effects of the UK government’s actions in these areas, committing to providing additional advice and assistance to EU citizens, opposing unjust immigration policies, resisting austerity, and arguing consistently that it is in the whole of the UK’s best interest to remain in Europe. The devolution of several social security powers this year (like the Best Start Grant, as well as the Carer’s Allowance Supplement) also marked the beginning of a Scottish social security system based on dignity and respect – giving us a glimpse of the fairer and more just society we could build. I was proud to work on the Social Security (Scotland) Act in the first half of this year, which has enabled the Scottish Government to make positive changes where it has the power. Unfortunately, there are limits to what Scotland can do while we are still tied to a UK Tory government that is taking us into a clearly self-defeating Brexit, and depriving parts of our community fair work, dignified living and the ability to meet basic needs. I sincerely believe Scotland wants to, and will, choose a different path from the right-wing Tory government’s anti-immigration, neo-liberal agenda, which we hear too often from our television screens and in our newspapers.

Being Leith’s MSP is a real honour and in these challenging times, I’d like to remind Leithers that I work for you. I can’t solve all the issues that people come to me with, much as I would like to, but my team and I do all that we can to help. It’s easy to contact me if you have any concerns and I’m highly accessible, with my office on Constitution Street and my weekly advice surgeries in Leith Library, as well as pop-up surgeries in local supermarkets and elsewhere.

There will major challenges next year – from Brexit to Tory Universal Credit to local challenges like continuing to oppose proposals to demolish 106-154 Leith Walk. However, 2018 has demonstrated again that Leith is on the up – new affordable housing is being built, local businesses are succeeding, local organisations are achieving and we are ever stronger in diversity. In these times of flux let’s stay optimistic and, of course, persevere. Wishing everyone a happy Hogmanay when it comes.