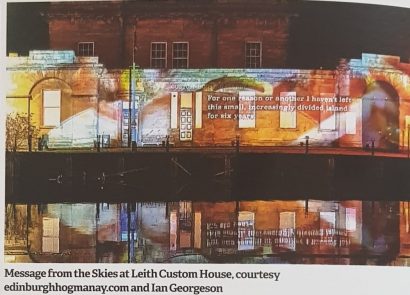 “Yesterday, we were your immigrants of today. Before us, there were others. There were always others, dear restless, many-hued Europe.”  This line from Kapka Kassabova’s Love Letter to Europe is a powerful evocation of how wrong the Brexit process feels to most of us in Scotland.

As many of you will have seen, this January Message from the Skies, Love Letters to Europe projected six pieces of writing onto historic buildings around Edinburgh. Two of these projections were in Leith – one at Leith Library and another at Custom House. The Leith projections were some of the more personal letters, evoking family experiences of migration and travel around Europe, and of the freedom of movement Scots want to retain to love and live in the European family of nations.

For the last two and a half years, and nearly as long as I’ve been Leith’s MSP, Brexit has dominated UK politics. And over those months, much of the debate in and around Westminster has been both worrying and ugly, including an incredibly short-sighted discourse on immigration and internationalism among both Tory and Labour MPs. At times, Brexit has painted a dangerously intolerant and parochial portrait of British society – a portrait that of course does not reflect Britain as a whole, and certainly doesn’t reflect the Scotland we are building or the vibrancy of Leith.

I thought of this recently when leaving my regular Monday advice surgery at Leith Library, as the words “Thinking what’s in front and what’s behind” flashed fleetingly across this historic building.  Billy Letford’s letter reminded me and all of us how quickly the diverse, international Scotland we cherish could slip away if we don’t act purposefully to protect it and enhance it.

Nowhere is this more true than on the issue of immigration, where the Scottish Government has campaigned vocally against the UK Government’s restricted migration plans, as well as their now ditched plans to make EU citizens pay to apply for Settled Status. Leith and Scotland as a whole have benefited hugely from migration over many years – as Kapka Kassabova’s Love Letter to Europe elegantly puts it, “everybody came from somewhere, migration is our inheritance… yesterday, we were your immigrants of today” – and those of us who believe in a plural, diverse society need to work to stand up for that and the positive benefits of migration, especially now.

As Leith’s MSP and a member of the Scottish Government, I’m absolutely committed to doing this. It was pressure from the 3 Million campaign, the Scottish Government, SNP MPs, businesses and many others that thankfully forced the Prime Minister to back down on making EU citizens pay a fee to stay after Brexit. And now, myself and others continue to campaign against EU citizens having to apply at all to retain their rights and continue contributing the huge amount that they do to our shared communities. To help EU citizens at this time, the Scottish Government is also providing an additional advice service in collaboration with Citizens Advice Scotland. Leithers from elsewhere in the EU who would like any help at this uncertain time will be able to access this at the Citizens Advice Bureau on Dalmeny Street.

Of course, a solution to all of the Brexit challenges we face together would be to remain in the EU. That’s why me, the Scottish Government and SNP MPs like Leith’s Deidre Brock and Tommy Sheppard, are pushing for a second referendum, otherwise known as a ‘People’s Vote’. It’s been disappointing to see such reluctance from Jeremy Corbyn’s Labour Party towards supporting another referendum, especially given how much young people support a second vote to protect their futures, however we in the SNP will keep pushing to represent Leith’s wish, by 78% in the 2016 referendum, to stay in the EU. As Chitra Ramaswamy’s poem said, projected onto Custom House, “Like good coffee and ruined castles, Eurovision and wine, Leith simply is European.” That’s why Deidre, Tommy and I strongly support a People’s Vote for Leithers and everyone in the UK to have another chance to vote to Remain as part of the European Union family.

Despite the challenges of Brexit, from our pro-European internationalism to landmark legislation to tackle gender-based violence and champion inclusive education, there are reasons to be positive about how Scotland is leading the way in the promotion of diversity, tolerance and respect.

For example, Police Scotland’s recent Dear Racists/Homophobes/Disablists/Transphobes campaign was recognised around the world for its clear and bold message that discrimination in any form is unwelcome in Scotland.

At the end of last year, I was glad to see the Time for Inclusive Education (TIE) campaign, which I have proactively supported, achieve their aim of the Scottish Government accepting all of the LGBTI Inclusive Education working group’s recommendations. This will make Scotland the first country in the world to have LGBTI inclusive education embedded in the curriculum. And having recognised LGBT history month this February, we can be proud of this world-leading step Scotland is taking!

What’s more, the landmark legislation passed last year to expand the legal definition of domestic violence to include verbal abuse and coercive control also comes into effect in 2019. This legislation has been described as “fundamentally innovative” by Scottish Women’s Aid, and will make a real difference in our campaign for gender equality.

And so, aside from the worries and uncertainties around Brexit, Scotland is leading the way in championing a progressive, welcoming and tolerant agenda on LGBT rights, gender equality, inclusion, migration and internationalism. As Kapka Kassabova’s Love Letter to Europe says, “We are linked with invisible tendrils – like trees… Hope and love – that’s our antidote to fear. I carry it like a torch through your bitterest winters. I will not let the flame go out, dear neighbour, future friend from near and far…” Persevere.