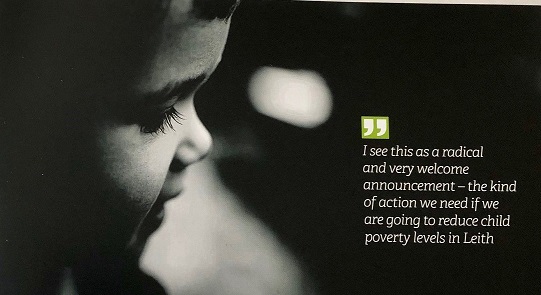 For many families in our area, whether there’s sunshine or not, the school summer holidays are a happy period. They are often a time for a break from work and the usual routine; a time to get away, either to another part of Scotland or abroad; or a time for children to learn new skills in sports or the arts, as provided for by a multitude of holiday clubs. But for other families, this time of year can mean the exact opposite – it can be a time of real stress and anxiety. For young people who rely on free school meals, the school holidays can sometimes lead to children going hungry, as the UK Government benefit cuts leave families short of the resources they need to get by.

The background to these contrasting experiences for young people over the summer holidays was emphasised earlier in the year, through a “report card” on UK Government policies given by the United Nations. It was not comfortable reading for the UK Conservative Government. On 22 May 2019, the final report was published by the UN Special Rapporteur on Extreme Poverty and Human Rights, Professor Philip Alston. During his time in Scotland, he heard directly from people affected by poverty. He saw first-hand the rising implications on the poverty rates caused by UK Government policies and the damage caused by their welfare changes and austerity.

The UN report highlighted the UK Government’s regressive measures, such as the benefits freeze and two-child cap, which unfortunately some of my constituents know only too well, and concluded that the UK Government must reverse the many policies that it has pursued, which are increasing poverty and inequality. The Special Rapporteur was also clear that the UK Government has been failing to listen and is “determinedly in denial”, to use his phrase, regarding poverty in the UK,  and that radical changes are necessary to provide support to people.

Against this background, the Scottish Government is doing all it can to try to help those who are struggling, by providing a range of measures including support for children from low-income families during the school holidays, with a fund of £350,000. This fund has been allocated to charities and Councils to provide more places where children and young people can go during the school holidays to play, socialise and, importantly, have a nutritious meal. But I know we need to do even more – and that’s why I was so pleased when the SNP Scottish Government recently announced a new social security benefit designed to lift children across Scotland out of poverty. By the end of 2022, eligible families in Scotland will receive an extra £10 a week for every child under 16 – low-income families with children under the age of six will be fast tracked and start to receive the benefit in early 2021. This announcement means that eligible families with two children under 16 will receive an additional £1,000 a year to spend on day-to-day essentials, from clothing to school equipment. Once fully rolled out, this new Scottish Child Payment will benefit up to 410,000 children across Scotland – not only supporting those in poverty and but also preventing those on the breadline from sliding under. Unlike certain UK Government benefits, there is no cap on the number of children in eligible families and anti-poverty campaigners have celebrated the announcement of this new benefit as a “gamechanger”.

I see this as a radical and very welcome announcement – exactly the kind of action we need if we are going to reduce child poverty levels here in Leith, in the face of ongoing welfare cuts from the Tory UK Government. I am proud to be part of a party, and of a Government, whose ambition is clear – to tackle poverty and give our young people the very best start in life we can, whatever their background.

Unfortunately, the sad reality is that the SNP Scottish Government is always fighting poverty in Scotland with one hand tied behind our back. With independence, we could make better social security policy decisions across the board, and we wouldn’t need to spend thousands of pounds every year mitigating harmful Tory policies. Nevertheless, until Scotland is independent, the Scottish Government will continue to take serious, bold action using the powers we have, in order to address the needs of Scotland’s people, tackle injustice where we can, and work to build a country where every family can enjoy the summer holidays.