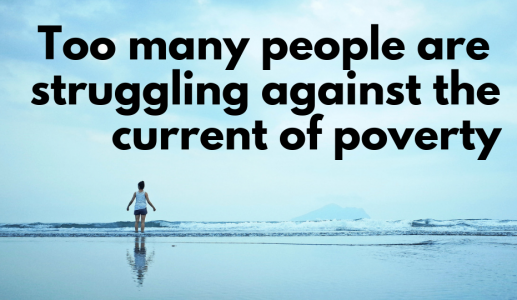 Eradicating poverty and fighting for social justice are some of the central reasons why I got involved in politics. So how do we turn those ambitions into actions and make real change in our communities?

As we recognise Challenge Poverty Week (October 1st-6th), I’d like to share a few thoughts about the steps I think we need to take, and are already taking, to build a Scotland in which no one lives in poverty.

Solving challenges around housing, many of which are legacies from old Tory policies like selling off much-needed council houses, are key to tackling poverty. And it is a task that we in the SNP are doing everything in our power to address. We’ve built more than 76,500 affordable homes since we first came into government in 2007, and over the lifetime of this Parliament, we’re investing more than £3 billion to deliver at least 50,000 affordable homes including 35,000 for social rent. The Scottish Government is also working with Housing First to move towards eradicating rough sleeping in Scotland, and has established a £50 million Ending Homelessness Together Fund. And in 2016 we ended the right-to-buy, so that each year we are increasing the availability of social housing stock in Scotland. In 2017-18, the total new social sector homes started in Scotland was 6036 – in England it was, unfortunately, only 1409.

In the SNP, we strongly believe in investing in our public services and welfare state, to create a Scotland in which no family will be dependent on food banks or homeless hostels, as happens too often under harsh Tory austerity.

I therefore welcomed the Scottish Government’s Child Poverty Action Plan, announced earlier this year, which made a commitment to reducing absolute child poverty to less than 5% by 2030. With the limited welfare powers we have, the new Scottish Social Security Agency is also enabling us to help give children the best start in life, as well as giving carers the recognition and support they deserve. And unlike the often cruel practices of the DWP, Social Security Scotland is founded on treating all who use it with dignity and respect, which is why we will not be outsourcing assessments for disability assistance to private providers, as is done in the rest of the UK.

There are many organisations in Edinburgh Northern and Leith doing important and innovative work to empower our communities and support those most in need. There’s Granton Community Gardeners, who hold free community meals, and North Edinburgh Childcare, providing affordable childcare and accessible routes into training and employment. Cyrenians and Social Bite, supporting people experiencing homelessness. Pilton Community Health Project, the oldest community health project in Scotland, and Dr Bell’s Family Centre, who support children and families with their creche and counselling services, and too many others to mention.

As I meet with groups in my constituency, I am frequently humbled by the solidarity and community spirit that exists in Edinburgh Northern and Leith, and our collective determination that no-one should be left to struggle in poverty.

But while it is important to recognise the contributions made by charities, volunteers and social enterprises, towards the shared goal of social justice, they should never have to fill the gaps left by the Westminster Government’s decision to impose austerity on those most in need, and their running down of our public services and welfare state.

Scotland is a country abundant in natural resources, skills, compassion and innovative ideas. However, until Scotland is independent, the Westminster system constrains Scotland, in that we cannot use these resources to their full benefit, nor can we fully act on the widespread political will that there is to make society more socially just, and to ensure that everyone in Scotland is free of the unfairness of poverty.

While we remain tied to governments in Westminster, unprepared to take the necessary measures to reduce poverty and inequality, unfortunately wealth will be increasingly concentrated in the hands of a few. While austerity measures, insecure work, disastrous welfare reforms like Universal Credit, and other Westminster policies, have been driving more people into in-work poverty, the gap between the richest and the poorest has widened with the world’s “super-rich” minority growing by 12% last year.

And on a global stage, the 3.7 billion poorest people in the world haven’t seen much of a “drip-down” effect either. So while we work to eradicate poverty in Scotland, we must also join the international community in efforts to tackle poverty in the least developed countries. As International Development Minister, I am proud of the part that Scotland is playing to support economic, health and education programmes that are helping communities in Malawi, Zambia, Rwanda and Pakistan move out of poverty.

To end poverty, we need more of this collective action. But more than that, we need a societal step change in the way we think about wealth, community and fairness. That’s why the Scottish Government’s introduction of a progressive income tax system is so important; it means people in Scotland pay a fairer amount of tax, in proportion to what they earn. It won’t end poverty. With around 60% of tax still controlled by Westminster, there are clear limits to what we in the Scottish Parliament can do to reduce poverty and inequality –  but creating a more progressive income tax system is one of several important steps we are taking in Scotland to challenge poverty. There is of course much more work to do but, together, we are making meaningful progress towards that more socially just Scotland that so many of us believe in. Think what more we could do to with the full powers of independence… Aye, we can.